We are thrilled to announce that Amos Mellbom and Mounir El-Koussa have joined the ranks of our structural engineering team here at Ashley & Vance! Both Amos and Mounir have hit the ground running and have already completed a variety of projects in their first few weeks.  We expected nothing less from a couple of graduates from Cal Poly, San Luis Obispo--a University that prides itself on its Learn-by-Doing philosophy. Amos earned his undergraduate degree in Civil Engineering and his graduate degree in Architectural Engineering.  In addition to completing a rigorous course load, Amos' master's thesis involved developing a parametric engineering model where he created, analyzed, and optimized a parametric structural system through the use of an automated algorithm.  Aware of the cutting edge nature of his project, Amos reached outside of academic circles and found a way to collaborate with the private sector.  Impressive as that is, some of Amos' best work was done while serving with Engineering Ministries International.  During his time with them, he assisted architects and engineers in the design of churches, orphanages, and schools throughout developing countries in Central America.

Mounir also comes with his own list of impressive travels and projects under his belt.  Interestingly enough, he was born in Sierra Leone and then moved to the States, where he eventually made his way to Cal Poly.  Mounir earned his B.S. in Architectural Engineering, and has recently focused his efforts toward designing the structure of a 15-foot portable telescope.  A recent San Luis Obispo Tribune article heralded Mounir's design, stating that, "Telescopes of similar size often weigh tons and are bolted into one location; theoretically they can be transported, but the task is extremely costly."  Wanting to reduce the size and cost, astronomer Russ Genet reached out to Mounir and his team, and they did not disappoint.  When he's not pushing the limits of telescope design, Mounir enjoys the laid back culture of the Central Coast and touts himself as an avid NBA fan. 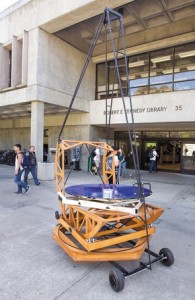 Needless to say, we're stoked to have both Amos and Mounir on our team, and we're excited to see how their experiences to this point will shape their work with us.