The Midtown Place in Redmond, Oregon, is an affordable multi-family housing complex that doesn’t look like your typical family housing. Thanks to a community-driven design team and motivated city planners, this 47-unit housing structure is bringing new life to downtown Redmond. We spoke with Ashley & Vance principal engineer Austin Davis and Pinnacle Architecture’s Shaun Clifford about how smart building designs can uplift a community. 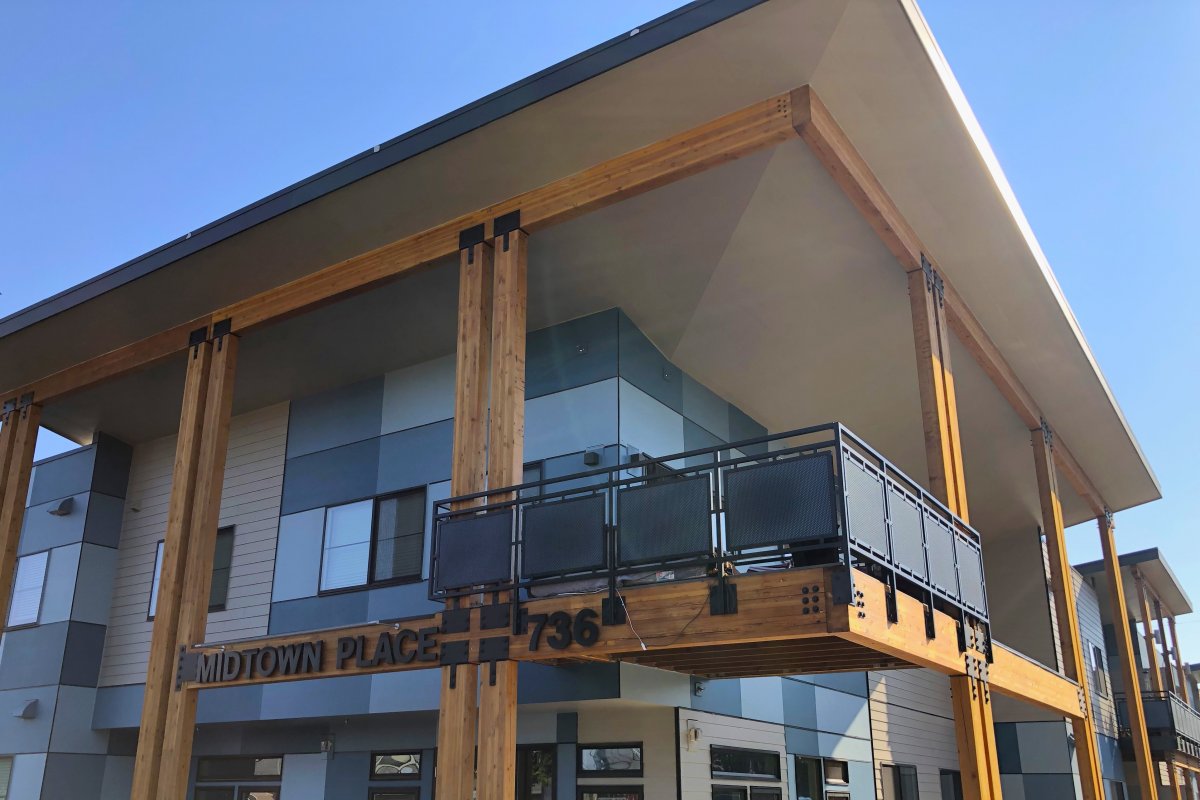 Adding a splash of color with various shades of blue brings life to the previously empty gravel lot. The corner deck is a showpiece seen from street level. And nearly every aspect of the design takes into consideration neighboring structures to ensure the design fits the area’s current aesthetic while adding a touch of modernity.

As project engineer Davis says, “Good designs like this can really impact the community. The architecture is beautiful and gives a feeling of elegance not always given to affordable housing, which has a positive impact on the community at large. Especially with projects such as these, we feel that it is our responsibility to allow beautiful designs to be constructed economically.” 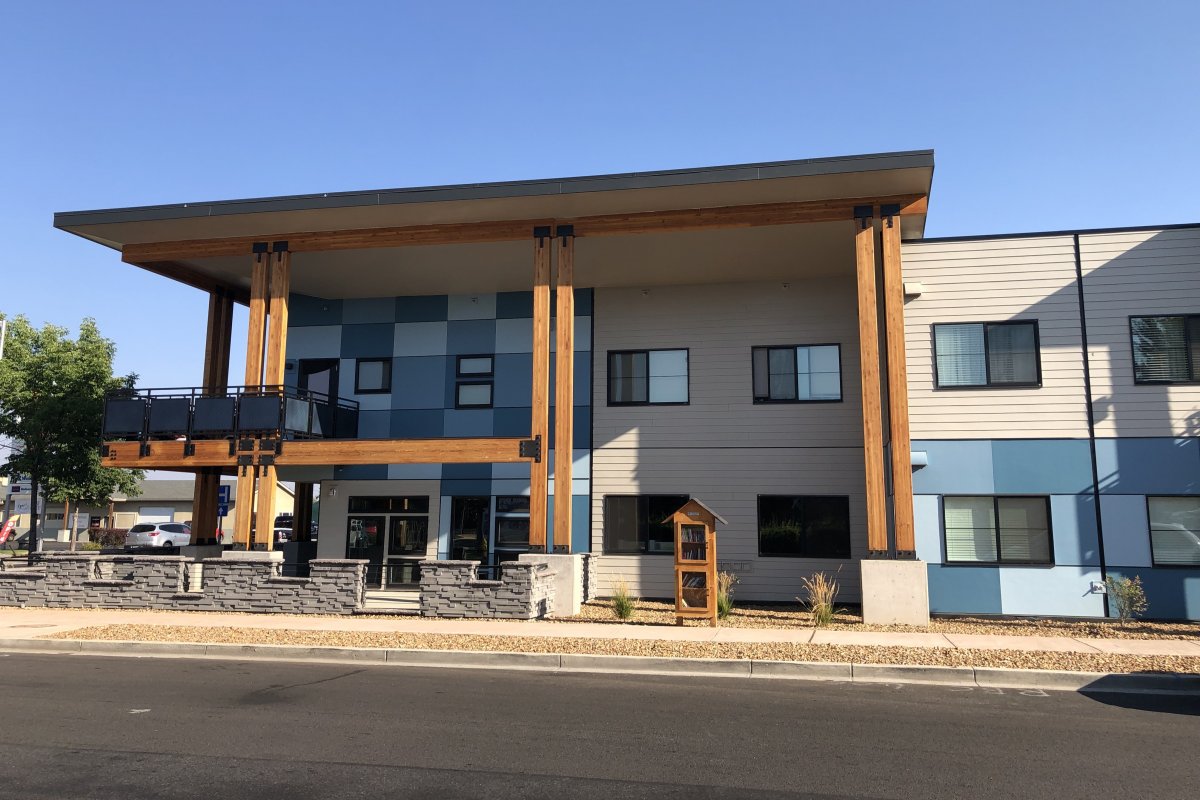 Featuring one-, two-, and three-bedroom apartments, Midtown Place offers 47 units on the higher end of the affordable housing market. There are two community rooms, one downstairs and one upstairs; an elevator; and centralized laundry. 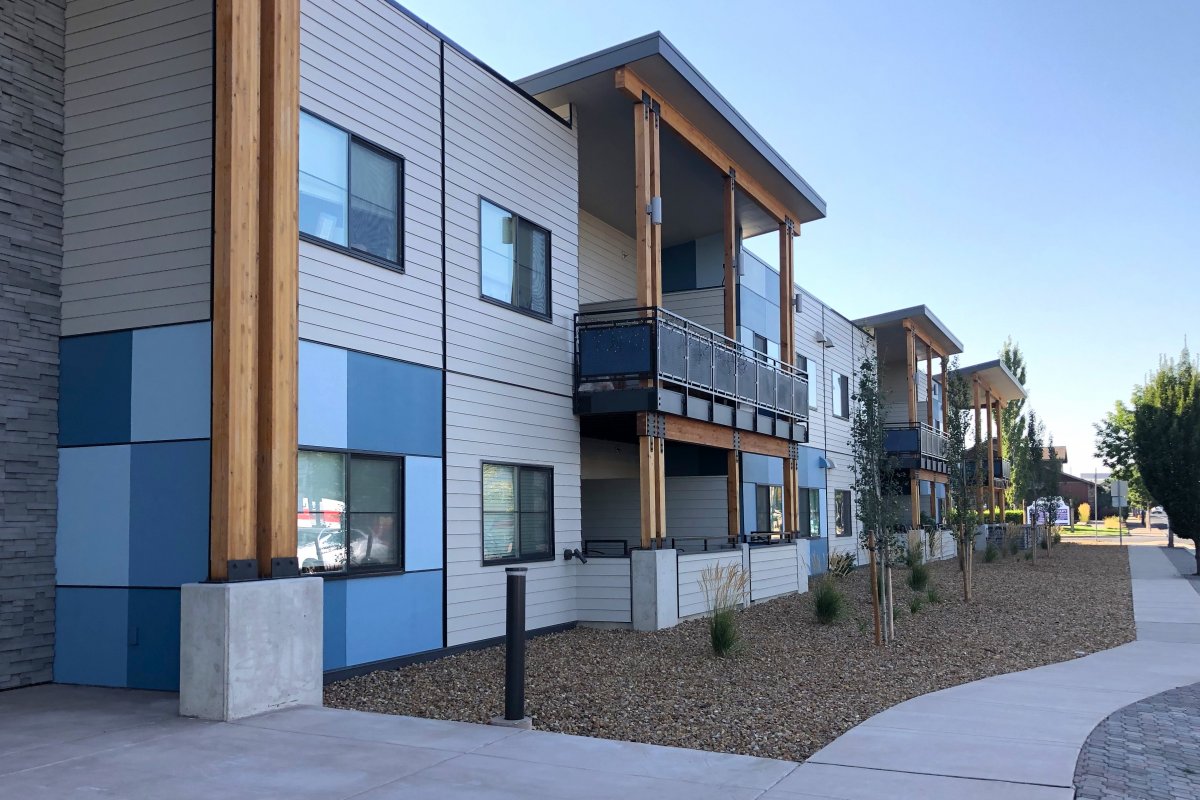 While some design elements may have higher upfront costs, these choices were made because of long-term energy savings. Designing for efficiency earned the Midtown Place Earth Advantage Platinum Certification and the building was nominated for the Central Oregon Association of Realtors award.

“As architects, we’re creating spaces that have social, physical, and emotional impacts on people,” says architect Shaun Clifford. “When it comes to designing and building, we want a neighborhood–through the built environment–to be an experience that will enhance the community and inspire others to contribute positively as well.” 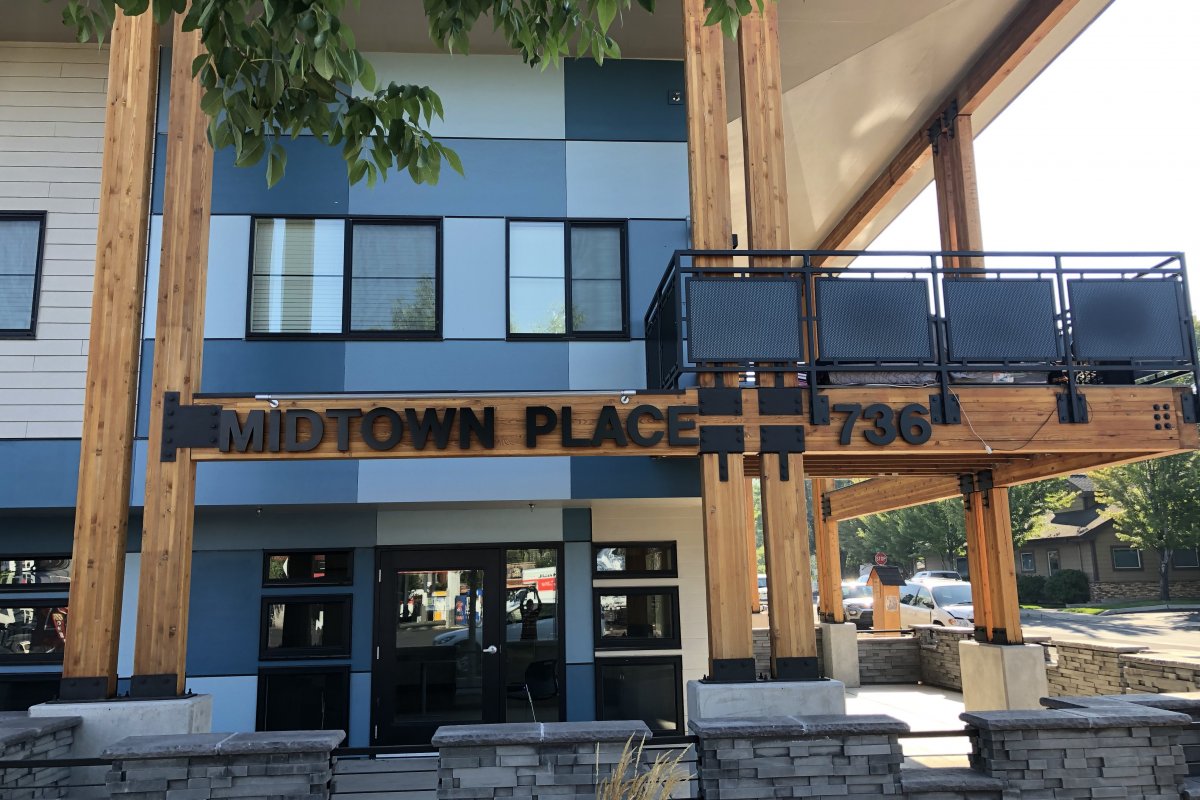 Developers, designers and engineers have a huge role to play in revitalizing communities not just for development’s sake but for the people who actually live there. Midtown Place was built on an empty lot, a previous eyesore in the middle of downtown Redmond. With commercial businesses on one side and residential on the other, Midtown Place strives to blend the two—a great example of how design teams can create coherence within an area.

Not only is this stunning architecture in the middle of downtown Redmond, it’s helping the community by bringing in affordable housing to people who are excited to live there. Ideally such positive community development inspires others to invest in beautiful, functional, and community-oriented spaces. 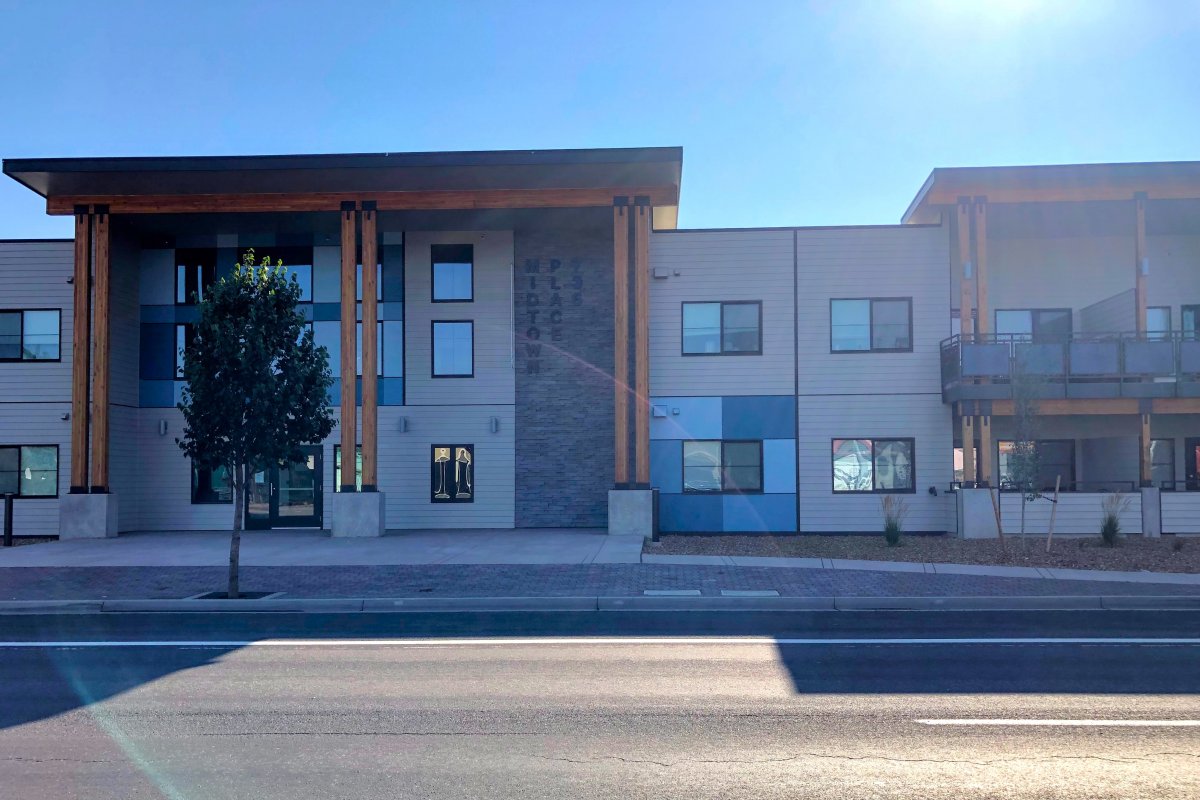 During the grand opening where the design team, Housing Works team, Pacific Construction and Development team, and city officials were gathered, people were asking if they could apply to live there. “Which means the building was nice enough that people wanted to join the area,” says Clifford. “With clearly such a high demand for affordable housing, it’s thrilling to know this one is desirable.”

According to Davis, “The Midtown Place hits the trifecta of smart urban design: It’s a good design, good location, with good social impact on the community.” And it’s just one example of how design teams that push for higher standards with smarter, more resilient building design choices can make a huge difference for communities, the future, and the built environment.

Puzzling Over Parking Has Unexpected Benefits

“People don’t often realize how much parking codes impact the design of a building,” says Clifford. “This is why the Midtown Place is an L-shape. We tried to minimize parking so we could maximize the amount of units.” Pulling together building codes that fit with green-design  and owner needs are part of what Clifford loves about being an architect.

In order to reduce car-pedestrian conflicts and adhere to parking regulations, the building was designed to be quite long and this resulted in a more L-shaped design. Such a long building requires additional constraints so they added undulations and created canopies to break up the length but also to comply with the zoning requirements.

The choice to go long may have been based on zoning codes, but the result was an unexpected positive to the design. The forced undulations allowed for bigger decks with simpler structural design and better usable space for the tenants. Plus, a modern yet inviting design that's visible and inviting from 5th Street. 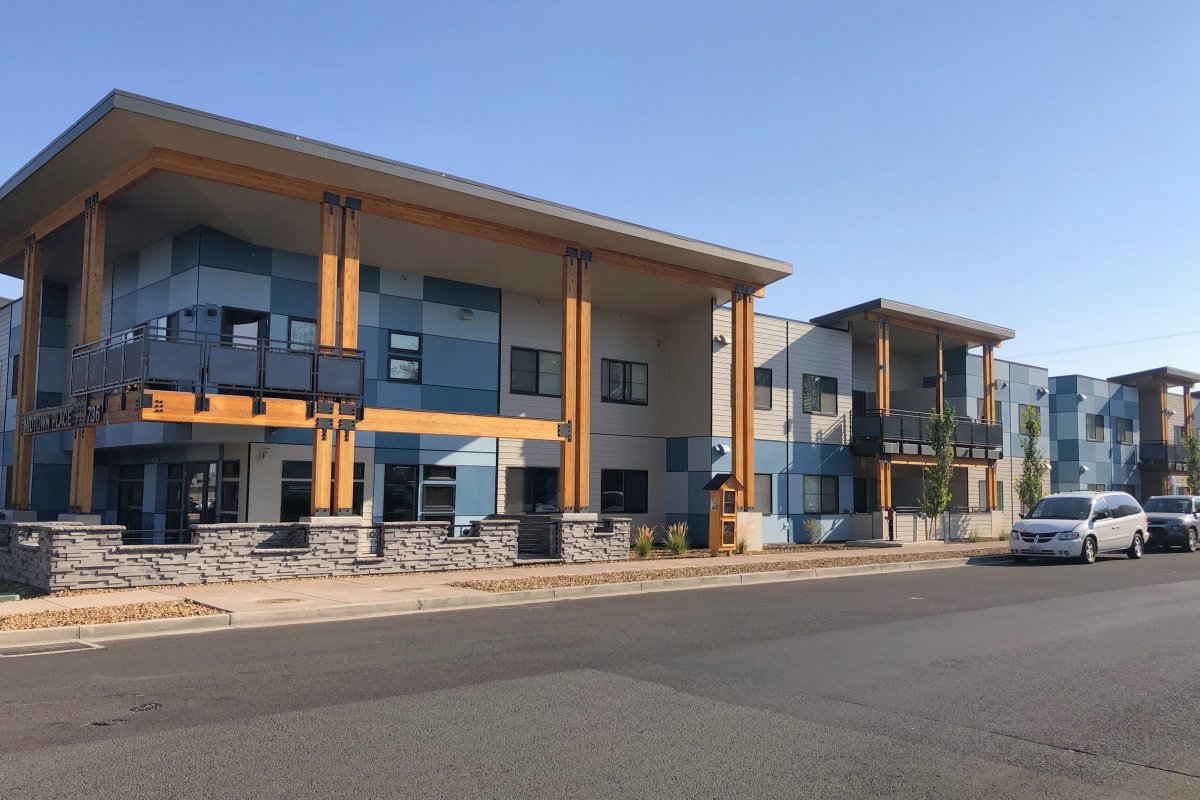 What advice do you have for design teams working on similar projects?

“One day the contractor called me with a question on how to proceed and I said, ‘Here are a couple of solutions, but how do you want to do it?’ The contractor said, ‘Oh wow, you almost made me cry. Nobody ever asks me that.’ I think it’s an important lesson to remember that as engineers, we’re just making sure the math works. For example, making sure these two huge cantilevers don’t deflect too much is our job, but the contractors are the ones in the field actually making it happen.

Communication is paramount. Being able to ask how they want to solve a problem versus saying ‘I'm the engineer, this is the only way’ really goes a long way. If we calculate design loads but can't figure out how to resolve issues into conventional detailing and the contractor can’t build it, that’s when things really fall apart. Working together to find solutions early can be way cheaper and save the project a ton of time. One hour of my time drawing a better detail can save them weeks in the field.”

“Be excited about whatever you do. If you're excited about a project, you’re more likely to think of ways to make it as good as possible. At Pinnacle Architecture, we do a lot of community development projects because that's our passion. Don’t be afraid to rehash ideas. Maybe you thought you solved an issue, but there's one thing that’s still itching at you, bring it up and make sure everyone is on the same page.

At Pinnacle, we always list our ‘Criteria for Success’ as a project’s main guiding focus. This helps us remember the big picture, stay focused on what we’re trying to achieve, and helps filter out the rest. For example, the goal may be to create a project for the community, but more specifically, we want it to be as walkable as possible. We want the building to express the area and make people feel joy."